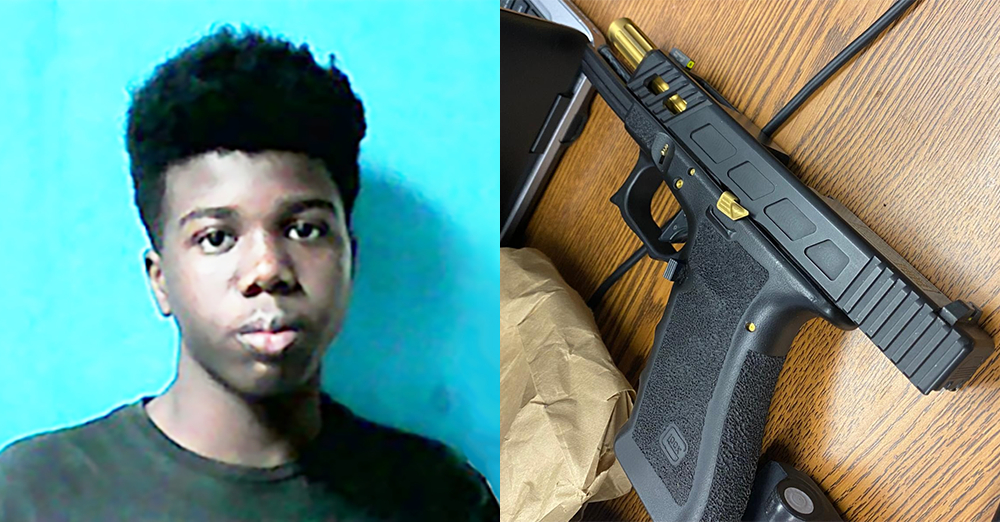 On Wednesday, March 9, 2022, Polk County Sheriff’s deputies arrested 14-year-old Anthony Archer* of Poinciana, who is an eighth grader at Lake Marion Creek Middle School in Poinciana, for possession of a firearm on school property (F3), grand theft of a firearm (F3), carrying a concealed firearm (F3), and unlawful possession of a firearm by a minor (M1), after a witness reported he heard that Archer was going to shoot up the school and shoot a teacher first.

During change of class at second period, the witness heard about Archer’s remarks, and immediately asked his teacher for a pass to go to the office. When he entered the hallway, he saw the dean of the school, and told him. The dean summoned the School Resource Deputy via radio to the eighth-grade building.

The deputy responded and removed Archer from his classroom and asked if he had a weapon on him. Archer told the deputy that he had a handgun tucked into his waistband. The deputy removed a Glock 9 mm from the front right side of Archer’s waistband, and a magazine from his pocket that was loaded with one round. The gun was not loaded. The deputy placed Archer under arrest.

The witness told the deputy he also heard that Archer showed someone the gun on Monday, March 7th. The deputies interviewed that witness, and she confirmed that Archer lifted up his shirt and showed her a gun tucked into his waistband during fifth period on Monday after she refused to give him “dap” (a fist bump/high five). That witness also told the deputy that on Tuesday, March 8th, Archer was playing with a bullet and told her that he was going to “shoot up the school” and that “nobody will make it out alive.”

Deputies interviewed other students, who reported that during math class on Tuesday, March 8th, while Archer was being picked on he made a motion with his hand as if he had a gun, and said, “Don’t come to school tomorrow,” then laughed.

During the investigation, deputies learned Archer obtained the gun from his parents’ locked bedroom while his parents were out of town – Archer’s grandfather was left in charge, and did not know that the parents owned a firearm or that it was in the locked bedroom. He allowed Archer in the room to use the shower in the master bathroom, at which time Archer took the gun.

“The child who immediately reported this crime to school administrators is our hero – he heard something, and immediately said something. There is no telling what this eighth grader might have done otherwise. This juvenile suspect is facing some serious felonies.” – Grady Judd, Sheriff

*information about juveniles charged with felonies is public record, per Florida Statute 119.